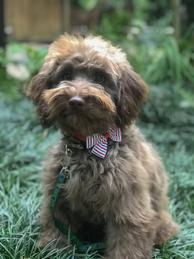 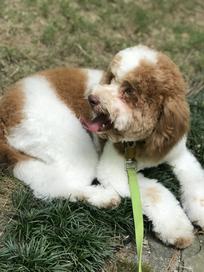 Sage and Duggy:  This is a multigenerational or F3 litter of mini Goldendoodles.  Sage is about 28 pounds and Duggy is 16 pounds.  This is a first pairing with these two parents but we expect them to mature between 20-28 pounds. Both parents have dominant furnishings, so we know that the entire litter will as well.  That’s the key ingredient to non shedding.  Both parents carry one copy of curl, having a wavy coat so all three coat types are possible (straight, wavy and curly).  Sages due date is July 19th.  We are excited to see all of the colors and patterns that are possible with these two! 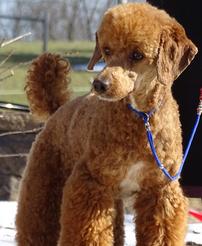 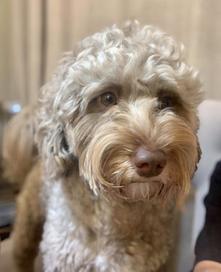 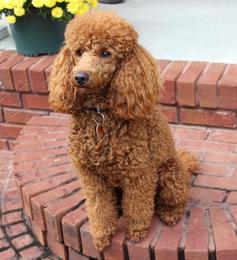 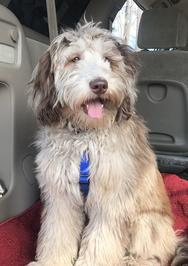 Benelli and Gunner:  These are two colorful parents in both coats and personalities!  This will be an interesting litter with Benelli's dark chocolate merle coat color and Gunners Chocolate Sable Parti coat.  We are expecting Blondes and Reds with these two as well as Chocolate versions of Merle, Phantoms and Abstracts.  Gunner's Sable gene makes his brown coat look red so some of these puppies will be dark chocolate while others will be lighter and become more of a reddish color.  These will be F3 or Multigenerational mini goldendoodles with curly and classic wavy coats.  They should mature 20-25 pounds.  Benelli is 24 and Gunner is 17 pounds.  Benelli's due date is September 4th. 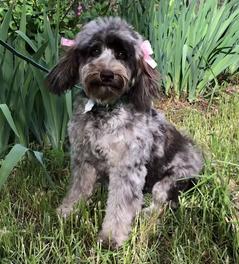 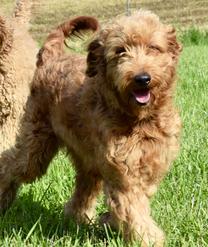 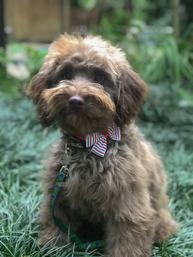 Lumen & Aubie:  These will be F1b puppies and range in size from 25-35 pounds.  We expect blondes, Apricots and Reds with both curly and wavy coats.  Many of Lumen's past puppies are service or therapy dogs and have obedience titles like Benelli above!  Aubie is the sweetest tempered little poodle guy around.  He would even leave home onboard the UPS truck if he could.  He's a people kind of guy!  Lumen will be due September 8th. 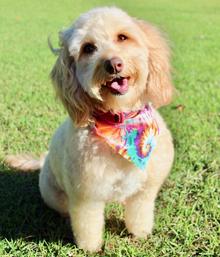 Rou and Kramer:  This is a repeat cross with these two parents.  The last litter was really pretty and best of all has wonderful temperaments.    Rou is an F1b and is about 25 pounds.  Kramer is also an F1b and is 18 pounds.  They are small dogs but solidly built.  These will be Multigenerational or F3 puppies with the advantage of both parents having dominant furnishings.  Both parents are from English lines which are sometimes called "Teddy Bear" goldendoodles.  Rou is due August 30th.  I have left this pair's last litter under the attached button for Rou & Kramer.  This new litter should look similar as far as the colors.  Size is ranging from 14 to 25 pounds on the past litter with these two parents.

Josie and Kramer:  Both Josie and Kramer are F1b mini Goldendoodles and that will make this litter "multigenerational or F3".  When we look at breed percentage analysis of this type of pairing, it looks just like an F1b with the advantage that we know all of these puppies will have dominant furnishings like both parents do. That is the most key factor in nonshedding coats.  Both parents have wavy coats, so we could have all three type coats: curly, wavy and straight.  We will be running a genetics test to see how many copies of curl each puppy has.  Josie is due August 23rd. Josie is about 28 pounds and Kramer is 18 pounds.  We expect the puppies to mature 20-25 pounds. We expect blondes, apricots, chocolates and chocolate merle.

We have quite a few exciting litters!  Scroll down to see a rundown of the parents and then click the buttons to go to the pages for that particular litter.  Some of the moms have a "past puppy" button as well.  You can click those to see what their past puppies looked like as puppies and adults. 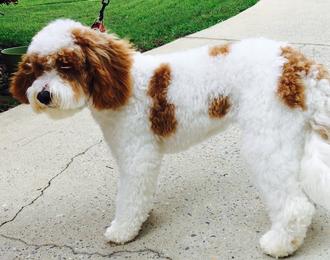 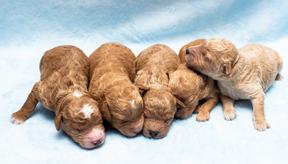 Bailey and Yukon: Bailey has had some fantastic puppies with Yukon and this litter does not look like an exception!  Just check out Bailey's past puppy button and you will see that they will all be gorgeous puppies.  We have reds to blondes and about half will be cury and the other half more of a classic goldendoodle wavy coat.  Their past F1b goldendoodle puppies have ranged in size from 22-40 pounds, with most being around 25-30 pounds.  This litter was born June 22nd and is already reserved. 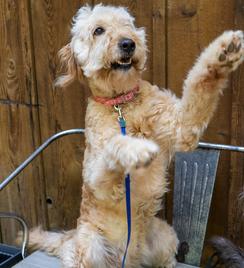