Benelli is Lumen's Puppy and is a very smart girl.  She earned her Canine Good Citizen Title at just 7 months.  She has a miniature poodle dad which makes her an F1b. She is 25 pounds but very stocky and short.  She is a "lot of dog in a little package".

Rose is an f1b and is a small girl of about 28 pounds.  She has a curly coat and carries the parti gene.  She is a quiet and mellow sweet-tempered girl.  She has had some gorgeous puppies with bright red and white parti coats and lively personalities that are very trainable. 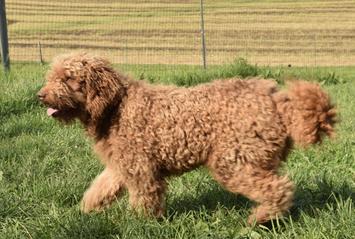 Diva is an F1(50/50 Golden Retriever/poodle) and she is 42 pounds with a very thick curly coat.  She has a lot of rich tones of red in her coat.  She also has a liver nose and is chocolate-based.  With the right sire, we will have some gorgeous puppies.  Diva has a sweet personality and is very bubbly and playful.

Rue is an F1b non- shedding23-poundGoldendoodle.  She is a fanatic about playing ball and meets no strangers.  She is also very sweet and tolerant of children.  Her dad was a chocolate merle mini poodle and her mom was a gorgeous English f1 Goldendoodle.  Rue carries the merle gene and passes that on to some of her puppies creating beautiful, unusual colors!

Bailey is a sweet-tempered smaller F1 Goldendoodle weighing about 40 pounds.  An F1 means that she is a first cross which is 50% Golden Retriever and 50% poodle.  She has a nice wavy coat that has a lot of red in it.  Her puppies have impressed us with a nice laid back temperament and are easily trained.  Even though she is an F1 she has a minus minus on the second shed allele so she does not shed.  She has also had some of the darkest red puppies that we have ever seen, they are beautiful!

Buffy is an F1(50/50 Golden retriever/poodle) and about 43-45 pounds.  She has a wavy coat and a pretty blocky shaped head.  She is actually the sister to Bailey.  Both are sweet calm tempered dogs.

Delia is a happy blonde curly girl with a curly tail as well.  She is an F1 meaning she's is a first cross that is 50% golden Retriever and 50% Poodle.  She is a smaller frame but lanky girl.  She will have really curly f1b puppies.

F1 Golden doodle.  Father was a 20 pound imported moyen poodle. Her mom was a smaller golden retriever with a beautiful blocky head and was a long-lived and very loved family pet.  Lumen has a CGC title and is also a tracking dog.  Some of her pups have been trained as service dogs and therapy dogs. Click here to see some of her past puppies

Dora is actually Delia's full sister.  She is an f1 golden doodle (50/50 golden retriever and poodle) with a nice dark red wavy coat.  Unlike her sister she carries brown and can produce chocolate as well as dark red puppies. Her f1b puppies can be both wavy and curly.

Sage is such a sweet girl.  She never gets far from her people.  She is a "velcro" dog!  She's a 28 pound beautiful red and white parti with the longest of eyelashes.  That is because she has great coat genetics with dominant furnishings.  She is actually a double doodle and has an excellent temperament and will have some beautiful puppies that will not shed because of her coat genetics and hopefully with her temperament. 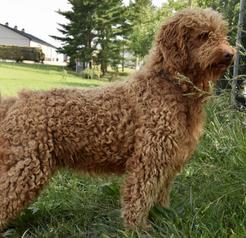 Josie is also Lumen and Pitots puppy.  She is an F1b and is about 30 pounds.  Josie is a sweet girl with a laid back personality.  She has grown up as a college dog with my niece. 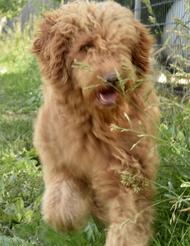 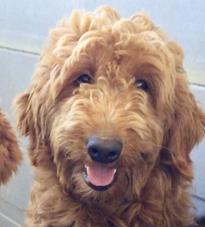