These are some of the "dads" that we use in our program.  Most are not owned by us but some are.  Please contact about the availability of Stud service.

To view Yukon's genetics testing click the logo below.

Yukon is such a stout well built miniature poodle.  He is an outgoing friendly guy.  He has excellent genetics, both on being clear of disease and having dominant furnishings, two copies of curl and zero shed alleles.  His puppies tend to be calm and easy to train.  He often passes on the parti gene which means his puppies sometimes have white on them.  He also carries brown and will produce chocolate puppies as well if the mom also carries that color.

This guy is probably the cutest puppy we have ever seen!  He is very outgoing and friendly, never meeting a stranger.  He is a chocolate parti but carries the sable gene which has made his chocolate coloring look more red.  He is a multigen from two f1b parents.  His breed percentage testing looks just like an f1b and he has dominant furnishings, two copies of spotting and a curly coat.  He is a lanky 17 pounds.

We took one look at this guy as a puppy with his hair all sticking up and the name stuck!  He has been the most laid back easily trained little doodle around.  We hope that his puppies have his temperament.  He is an F1b from English lines and has a toy poodle dad.  He is chocolate, has a wavy/curly coat and is 18 pounds.  He has excellent hair coat genetics, health genetics as well as great hip test results. 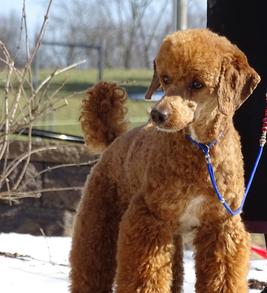 Pitot is a sweet AKC registered miniature poodle weighing in around 12 pounds.  He is genetically clear of any diseases and has excellent coat genetics for doodles.  Two copies of furnishings, two zero shed alleles and two copies of curl.  He is a chocolate merle from dark chocolate non-fading lines.  There are quite a few championships on his fathers pedigree.  He is the product of my good friend and I conspiring about how to get together more often.  We searched the world over for the best poodle we could find to use as a future dad.  Pitot has been certified by OFA as having no evidence of elbow dysplasia and received an OFA hip rating of "Good".

Aubie is an AKC registered beautiful dark red poodle.  He comes from non-fading lines and actually is a black phantom hidden by his red genes.  His parents are German imports and are gorgeous dogs.  That is his father in the last picture.  He is about 16 pounds and is one of those "velcro" poodles.  He loves everyone and would prefer to be snuggled up on the couch with you over playing with other dogs.  He was also selected after a good bit of searching to be one of our dads.  He is "clear' of genetic diseases through parentage meaning neither of his parents are carriers of any diseases.  We tested his furnishings and shed alleles through paw prints lab and have recently completed a full Embark panel.