This is an exciting full parti litter with these parents! Parti means that the coat pattern is about 50% white.  Non-shedding coats are one quality that this entire litter will share as both parents carry two copies of dominant furnishings.  This is the most key factor involved in a non-shedding coat.  Sage is very focused on her owners and is never far away.  Gunner is a loving playful guy but both parents are snuggly couch potatoes.  Sage is normally 28 pounds and has a wavy-curly coat.  Gunner is 17 pounds and has a curly coat.  He looks red but is actually a chocolate sable.   I find that when you cross two doodles there is a range of sizes in the puppies.  However, I expect them to range from 20-30 pounds. 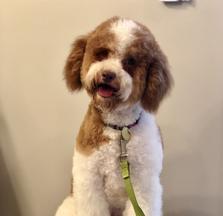 Sage and Gunner: Had their litter of 7 Puppies on July 1st  These puppies will be ready for new homes around August 26th. 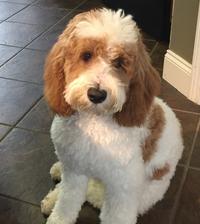